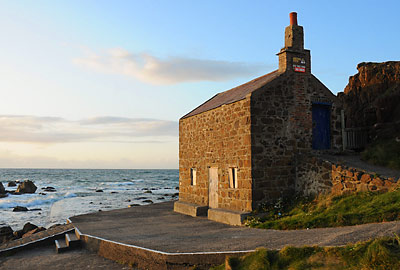 The Berrins fishery house at the Berne, Portstewart

Starting from the harbour area in Portrush, the Causeway Coast Way follows the promenade along the West Strand. This blue flag beach is over 1km long and has rolling waves that provide a popular spot for surfing.

At the end of the promade, the path turns right and climbs up a small hill beside a cycle lane for around 400m until it meets the Ballyreagh Road. Turning right, the Causeway Coast Way follows the footpath for ¼km, passing a short line of houses before turning immediately after the last house on the right. There is a road sign across the road denoting the boundary crossing into County Londonderry (County Derry) at this point.

With Portrush as the starting point, the Port Path is aptly named passing coves called the Devil's Port, Holywell Port, Stoney Port and finally leading into Portstewart. The next 4km of the Causeway Coast Way follows this path as it skirts the edge of Ballyreagh Golf Course along the cliffside.

After the first 200m, adjacent to a car park, is the site of Ballyreagh Castle which was destroyed in 1684 by the English Deputy Sir John Perott. Continuing for ½km, the trail passes between a small row of houses on the Glen Road to remain on the edge of the cliffs.

The next 1km section of coast passes the grave of an unknown sailor before arriving at a carpark at Ringaree Point. From here the views across to the Inishowen Peninsula in County Donegal begin to become more prominent.

From Ringaree Point, it is another 2km of walking before reaching the golf clubhouse and the promenade leading into Portstewart. After an initial 100m of path beside the busy Portmore Road, the trail turns right to follow a pedestrian route behind an apartment block and staying with the coastline.

Over the following 600m, the pathwayjoins the quiet street of Kinora Terrace and then a small park before arriving at the main harbour area of the town. A further 400m passes the main promenade of shops and restaurants before turning to the right and onto the Cresent.

Within ¼km, the roadside path narrows to a singular pedestrian path that passes beneath O'Hara's Castle. The final part of the Causeway Coast Way remains on this pathway which explores some of the coves for a little over 1km later. The Berrin's fishery house breaks the section into two, being close to the half-way point.

At a slight height, the final viewing point looks across the Portstewart Strand, the River Bann and the distant Mussenden Temple. The trail turns sharply to the left and climbs up past St Patrick's Well to reach the end of the Causeway Coast Way at the Strand Road. From here the Ulster Way continues to the left, on it's way to Castlerock and then the North Sperrins Way.

If it is early enough in the day, the coffee shop run by National Trust may be open down at the entrance to Portstewart Strand to the right. Otherwise, the centre of town can be reached either by turning left or retracing your steps for 1½km back to the main promenade of Portstewart.

Next   : Overview of Causeway Coast Way
Prev   : Portballintrae to Portrush