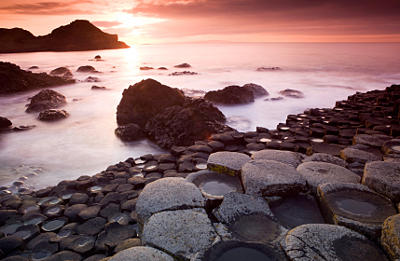 The Giant's Causeway at dusk

The Causeway Coast Way is a relatively easy low-lying coastal walk in the north-east of Northern Ireland. It takes a walker of average fitness 2-3 days to complete. The trail links the popular tourist towns of Ballycastle and Portstewart and passes some of the biggest tourist attractions in Northern Ireland. These include the Giants Causeway, Carrick-a-Rede Rope Bridge and Dunluce Castle. Bushmills Distillery is also just a short detour from the trail.

The Causeway Coast Way is just a section of the 'Ulster Way' trail, which completes a 1,000km circuit of Northern Ireland. The 'Moyle Way' and the 'North Sperrins Way' bookend the Casueway Coast Way at either end.

There is a wide range of terrains to experience on the Causeway Coast Way. In addition to cliff sections there are also beach walks, promenade strolls and some occassional road links. As the trail largely follows the nature of the coastline, the navigation is fairly straight-forward although there are signposts along the way to assure walkers of which direction to follow.

With the highest point on the trail being just over 140m above sea-level and none of the off-road sections being too remote, the Causeway Coast Way is a walk that can just as easily be enjoyed by the novice walker as the more accomplished hiker.