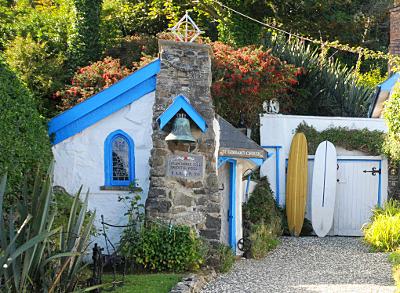 Within 1km of leaving Ballintoy Parish Church and descending the corkscrew road, you arrive at Ballintoy Harbour. The small, sheltered harbour is still in use and has several picturesque stone structures including the boat house, O'Rourke's Kitchen and an impressive lime kiln.

The trail passes a cottage to lead out onto a shoreline walk. After the last ice-age, the level of the land rose when the weight of the ice had been lifted. Evidence of this can be seen for the next ¾km through a series of raised beaches and stranded sea stacks.

One of the final sea stacks in the series is known as 'Elephant Rock' because of the obvious resemblance. At this point there is a narrow pass along the base of the cliffs to get onto White Park Bay. This section may not be passable during times of extra high tides.

The Causeway Coast Way follows the curve of White Park Bay for 2½km along the pristine, sandy beach. If a high tide prevents safe passage beneath the cliffs of Portbraddan, it is possible to take a detour before the cliff section, up the lane past the White Park Bay Hostel. The beach was owned by this hostel up until 1938, when the Northern Ireland Youth Hostel Association donated it to the National Trust.

Having passed the cliffs to reach Portbraddan, the trail passes a row of cottages. The first of these contains the miniscule 'St. Gobban's Church', which is often referred to as the smallest church in Ireland. Further along the row is 'Portbraddan Cottage', which is owned and rented out by the National Trust.

The next section initially passes the remains of the salmon fishery before following along the base of some cliffs and then passing through the hole of a sea arch at Gid Point. Beyond here, another series of old sea stacks can be seen that now remain firmly on land. After 1km of leaving Portbraddan, the Causeway Coast Way arrives at Dunseverick Harbour.

The trail starts to ascend along the road for around 150m and then turns right and back down into some fields. It then turns left and roughly follows parallel to the road and away from the sea until it reaches an inlet. Once having crossed a bridge over a stream, the Way continues for a further ½km to reach the main Coast Road at Dunseverick Castle.

Next   : Dunseverick Castle to the Giant's Causeway
Prev   : Ballycastle to Ballintoy