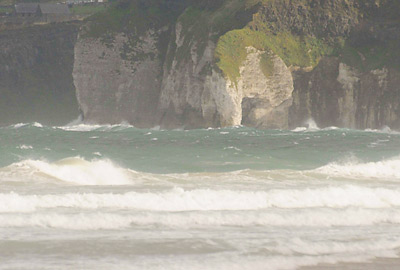 The cliffs of White Rocks from Curran Strand

The first part of this section sees the Causeway Coast Way leave the close proximity of the shore and head inland a little. The directions for the first 1km are not self-intuitive and full attention needs to be given to the signage when passing through the small estate of holiday homes.

Leaving the front of the Bay View Hotel, the trail continues to west briefly before turning left into an estate of holiday homes after 100m. It then continues for 150m before taking the second turn right into Gortnee Drive. Following the road for another 150m the trail avoids continuing right into the estate and instead finds a path behind the row of houses to the right. After 100m the Way then turns up into a field and progresses for aroun 300m to meet the main road.

Once on the main road, the Causeway Coast Way turns right to continue on a footpath along the side of the road. The road gradually approaches the sea and after 1¼km it splits into two separate lanes to get around a large mound. Although the official trail continues straight ahead on the road, we recommend taking the first right turn on a quiter lane to reach Dunluce Castle and the pretty café called the 'Wee Cottage'.

There is an admission fee into Dunluce Castle with access to exhibition rooms, gardens and ruins. There are also guided tours available. It is possible to access beneath the castle for free and see the Mermaid's Cave.

Continuing on the road towards Portrush, there is a large car park at Magheracross after ½km. Although the altitude is only 50m above sea-level, this is the highest point on this stage and gives a great vantage point for viewing Dunluce Castle.

The Causeway Coast Way continues along the main coast road for a further 1½km. During this time it passes above the various cliff formations of White Rocks, with the Giant's Head being one of the more easily recognisable shapes to stand out.

Just after the Royal Court Hotel, the trail turns off to the right and follows a minor road for ½km down to the beach. There is a large car park with toilet facilities before reaching the sand dunes.

Arriving onto Curran Strand, a small detour to the right will reveal the fantastic shapes in the chalk cliffs of White Rocks. They can more readily be appreciated from this lower viewpoint than from above on the road where previously seen.

The next 2½km of the Causeway Coast Way is along the sandy beaches of Curran Strand and the East Strand which leads into Portrush. The views out to the sea are of the Skerries, a series of small uninhabited islands and the landmass of Ramore Head.

After the East Strand, the trail follows a promenade towards the north-west tip of Ramore Head. On Bath Road, the Way passes the front door of the 'Coastal Zone', which is a visitor centre with exhibits on the coastline of Northern Ireland. The centre is open during Summer months and entry is free.

Once beyond the large parking area to the north-east of Ramore Head, the trail comes off the road and climbs a path up the north-west of the headland. After ¾km the path leads back in towards the central harbour area of Portrush.

Next   : Portrush to Portstewart
Prev   : The Giant's Causeway to Portballintrae